Why You Need an Electric Bike

Cycling is the new driving. Bike commuting, cycle-share programs, and expanding bike-lane networks top most big-city traffic agendas. But while attitudes toward cycling are changing, so are bikes themselves. Electronic bicycles—also known as e-bikes—have hit the scene and are making a major impression. While they look like normal two-wheelers, they have a built-in electric motor for propulsion; some kick in with pedaling and others have engines where you can thumb the throttle.

So, you ask, if the bike is doing the work, where’s the exercise? Well, the trick to making your e-bike a fitness tool is to use the motor just enough to keep going. Cycle until you’re either wiped out or you hit a steep hill, and then rev the engine for that extra oomph. Now we give the rundown on the benefits of e-bikes, and why you need to own one now.

Easier Travel
Most people who rule out commuting to work by bike do so because of the mess factor. Walking into a staff meeting sweating through your clothes is not a good look for the office. However, the combo of cruising and cycling that e-bikes provide saves you some effort (and some sweat), so you can burn some calories but prevent your ride from becoming a full-blown workout you’re not dressed for.

Core Strengthening
While the e-bike can aid you up steep inclines and help you cover ground faster, it’s also considerably heavier than a normal bike (some are upwards of 70–80 pounds). Between steering and pedaling, your own output (sans engine) can translate into a solid workout, especially for your core , which has to brace you with every turn. Keep in mind that electric bikes are simply a bike with a battery. The extra equipment makes it heavier, so you’ll get a more challenging ride when you’re pedalling.

A Lighter Carbon Footprint
Obviously, since electric cycling doesn’t consume gas, your e-bike emits a lot less carbon than a car would. In fact, in 2011 the European Cyclists’ Federation found that when comparing electric bikes to cars, the bikes emitted just 8.1% per passenger, per kilometer, of CO2 that a car spits out. And that can really make a measurable impact on the environment: a study from Transportation Alternatives found that if 10% of New York City commuters biked to work just once a week instead of driving or taking public transit, they could cut back on 120 million pounds of CO2 emissions per year—equal to the amount of CO2 released by 25,000 New York homes per year.

More Savings
In most states, riding an e-bike doesn’t require a special license, registration, or insurance. Therefore, investment and operating costs are almost nothing compared to a car. E-bike prices range between $500 and $1,000—about as much as a high-end road bike. Of course, replacing your battery can be pricey , but when you stack up bridge tolls, parking lot fees, and tickets, you’ll come out in the green.
Batteries need about three hours to fully charge, provides 30 miles of power. If you only have time for a partial charge, that’s fine too. The battery has a cable that plugs into it and any stand and wall outlet, you don’t need to find a charging station. If you stopped at a café for an hour on your trip, you’d get 10 miles of charge during that time.

Safer Riding
In 2009, 36,000 Americans lost their lives while driving. An e-bike poses significantly less risk to your vital signs than a two-ton, four-wheel, speeding vehicle does. For one thing, the speed on an e-bike is nowhere close to those that a car can achieve, and riding in bike lines (assuming you use them) keeps you out of the direct path of cars, lessening the risk you’ll collide with one.
That said, it’s not 100% safe; an e-bike carries the same safety concerns as a regular two-wheel bicycle: Don’t forget your helmet, don’t bike drunk (duh), don’t disregard traffic rules, don’t wear earbuds, and don’t jerk the throttle forward—just like you wouldn’t floor the pedal from a dead stop in your car.

It’s also noteworthy that bikes (of any kind) are more stable and controllable in motion than cars are, so accelerating with the throttle allows riders to navigate tighter turns better. And if you’re fatigued, use the motor. Unfortunately, a tired biker is a lazy one, with an electric bike, that’s obviously not a problem. You always have power when you need it.

As with buying a regular bike, getting an e-bike requires the right fit. Stop into a store and talk to a specialist, or try our new Men’s Fitness Electric Bike, complete with a reliable lithium battery and 500-watt electric motor that can reach speeds up to 20 mph 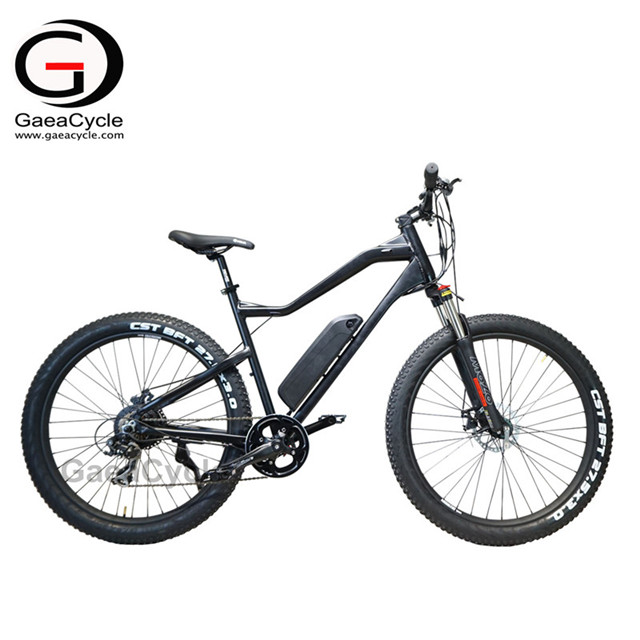